An old college budy and colleague from when I was workin' in Vietnam has recently landed a new job with a somewhat ostentatious title.  While chattin' I mentioned how he was gona need a kepi or some form of official headgear now, and later I figured a painting would be good for a laugh so this caricature of him took form.  I didn't want to ask him for any photos and ruin the surprise so I sorta had to work from the few pics I had, "close enough". 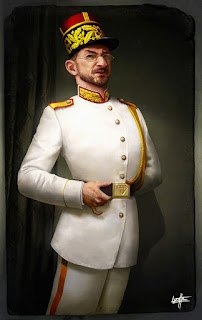 On a sadder note, a friend of mine bought the farm today, been in a coma since Friday night.  Known her about 10 years, she was a couple years younger 'n me as well.  Nothin' much to share really, maybe just a song.  So long Stef.