You might remember the piece I did at the request of the models Alloy Ash  & Elara Blair  from my last post.  Well Alloy liked it enough that she had it printed out on canvas, framed & hung it at her place, and she even sent me a picture too !  Which I thought was cool so I figured I'ld share : 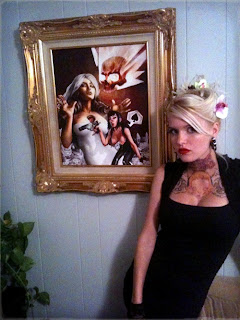 I'm still waitin' for my bike to get fixed after the accident, been almost two months now...  & my foot is still numb on the top and painful on the bottom, here's hopin' that clears-up soon.  Exploited are scheduled to play a show in with Blood for Blood this October.  Last time Exploited were booked for a show here, the government turned 'em back at the border and cars got flipped and burned and chaos ran amok in our streets.  I've got my ticket.

Can you spot Dave with the garbage can ?
(yes I know I've posted this clip before which is lame, but it's appropriate so)

And this one 'cause it's dedicated to my dog (almost).
Posted by Rambozo at 22:47 0 comments

Sooo, I was run over by a van goin' to work on my motorbike a few weeks ago, great times.  The bugger turned left from the middle lane without lookin' and clipped me, got my foot tangled-up in the bike as well.  If it weren't for the cop who happened to be behind us pryin' my foot free from the metal I don't think I was gettin' loose from that one.  Don't remember the guy's name but lucky he was there really.

An extra three cop-cars, fire truck and ambulance later and the van-driver also ended-up with a reckless-drivin' ticket, apparently that went down well (ya).  In all the confusion I somehow failed to notice the batman sign up in the sky.

I'm pretty lucky considering : x-rays showed I managed to avoid any broken bones again, "you just have to wait through the pain"... Almost there now, and after having to sort a few things out, the insurance is gettin' her fixed so hopefully I'll be able to make up for lost time before the end of the season. 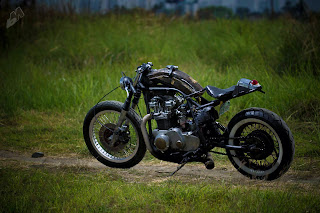 In brighter news I've been switched from illustration to the concept art team at work, pretty damn chuffed about that.  Can't post anything of course, but this is definitely good news.

I've also been asked for some artwork by two lovely models : Elara Blair and Alloy Ash (go check them out !!).  Finally made time to paint these ladies, and since I hadn't done anything "comic-booky" in a while I decided to feature them both in a made-up cover of my fancy : 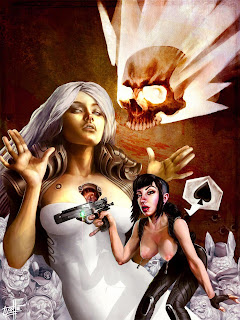